After getting support from NASCAR, mom of bullied boy speaks out about controversial photos 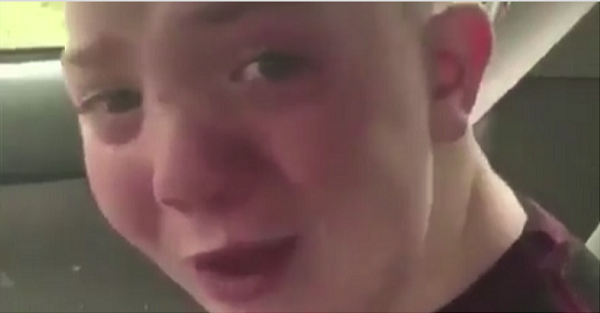 A video of Keaton Jones, an 11-year-old from Tennessee, took off on social media as the weeping boy described being bullied by other kids. It was so powerful it attracted the attention and support from athletes across the country, including Dale Earnhart Jr. and John Hunter Nemecheck.

But with notoriety comes scrutiny. Various media outlets posted a photo of Jones’ and his mother, Kimberly Jones, with a Confederate flag, and that set off all sorts of alarm bells. The photo has since been removed from Facebook, but Kimberly Jones went on CBS This Morning to defend herself and keep the focus on her son.

“It didn’t have anything to do with racist intent?” Strassmann asked.

“No. No. Absolutely not. I’ve said I spent most of my life being bullied and judged because I wasn’t racist,” Jones said.

The incident has placed a spotlight on the issue of bullying, and Keaton Jones  received a lot of support after the gut-wrenching video made its debut.

Dale Jr. Tweeted about the video and offered his friendship to the kid who’s obviously going through tough times.

This is heartbreaking. But the response of support for him is a beautiful thing. Add me to your long list of friends Keaton. https://t.co/NKasvdo00u

Keaton Jones  attends Horace Maynard Middle School in Matnardville, TN. Keaton’s mother recorded this video after picking him up early from school. Jones reportedly was scared to go to lunch after he said bullies at his school poured milk on him, shoved lunch meat down his clothes, and told him he was ugly.

?They make fun of my nose. They call me ugly. They say I have no friends,” he said in the emotional video with tears streaming down his cheek.. ?Why do they bully? What?s the point of it? Why do you find joy in taking innocent people and finding a way to be mean to them? People that are different don?t need to be criticized about it. It?s not their fault.?

Since being posted, the video has been viewed more than 20 million times on Facebook and a GoFundMe campaign was created to help with his future college expenses, which has already gathered approximately $20,000 in donations, according to SB Nation.

Besides Dale. Jr., a number of other sports figures have expressed their support of Jones, including fellow NASCAR driver John Hunter Nemechek?.

Meeting Colt for the first time I gained a lot of respect for him. This has taken it to a whole new level! 👍🏻 https://t.co/F7kDpzhP2l

Hey Little Brother I am so Sorry to hear what's been going on with You at School. I want you to know that Myself and So Many others are Here for You. I want you to send me your info and your number on DM and WE will have us a good conversation whenever you want My Friend….. pic.twitter.com/GA8fgozeek

NASCAR has a reputation for being a tight-knit family, so it’s nice to see drivers treat Jones like one of their own during his time of need.