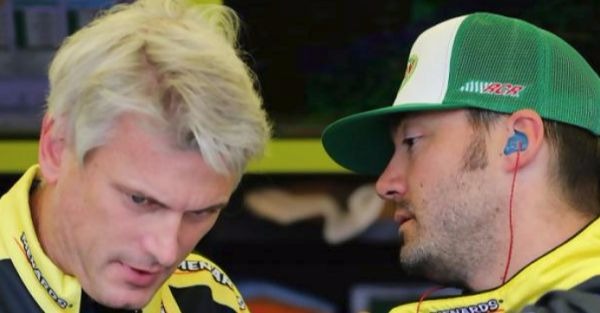 We finally know who will serve as crew chief for Richard Childress’ grandson in 2018.

Germain Racing has officially announced its reached a multi-year agreement with veteran crew chief Matt Borland to perform that job for the No. 13 team. Borland replaces Robert “Bootie” Barker, who had been with Germain since 2010.

In 2017, Barker was the crew chief for Richard Childress’ grandson, Ty Dillon, during his rookie season in the Cup Series. Dillon finished the year third in the Rookie of the Year standings, with a best finish of 11th-place, which came at Talladega and Phoenix.

In addition to changing crew chiefs, Germain Racing previously announced that technical director Chris Andrews and engineer Scott Whitehead would be leaving its team along with Barker.

Borland comes to Germain Racing after working as Paul Menard’s crew chief at Richard Childress Racing last year. Menard announced he’ll be making a move to the Wood Brothers in 2018 and RCR has yet to announce who will replacing Menard in the No. 27 Chevy or if that car will even participate in Cup Series races next season.

Much of the success in Borland’s career came while he served as crew chief for Ryan Newman. That driver-crew chief combo won 13 races during their time together at RCR.

?Matt Borland brings a varied skill set to our No. 13 program,? said team owner Bob Germain Jr, according to NBC Sports. ?With his engineering skills and veteran leadership, we are looking forward to continued improvements in our team results as we move into the new season and beyond.?