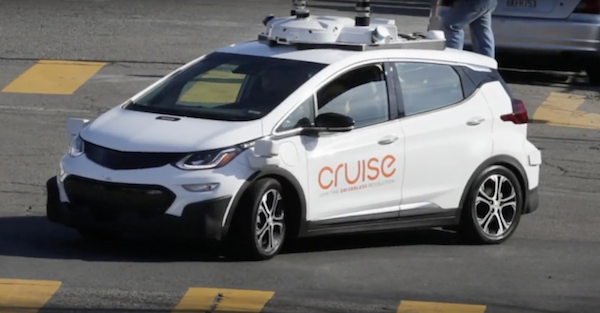 A man named Oscar Nilsson has filed a lawsuit against General Motors claiming that he was struck by an autonomous Chevy Bolt while riding his motorcycle.

According to the report by Mercury News, Nilsson said the Bolt signaled and began to change lanes to the left. Nilsson accelerated to pass the Bolt before the lane change was completed, which is legal under California’s law that permits lane splitting. The Bolt then aborted the lane change and allegedly hit Nilsson before he could pass, the newspaper reported.

The Bolt was being tested by GM’s subsidiary Cruise, and although there was a passenger in the Bolt, their hands were not on the steering wheel at the time of the incident.

GM reported a different story to the California DMV. It acknowledged that the car was being operated in autonomous mode at the time of the crash, but that Nilsson was at fault. According to thedrive.com, GM said Nilsson “moved into the center lane, glanced the side of the Cruise ? wobbled, and fell over.”

Courts will have to decide which story is true, but this raises an interesting question. If the Bolt is found at fault, who’s responsible for this accident? The passenger was not driving the car, but once autonomous cars are sold, they will be the property of whoever buys them. Will the automaker forever be responsible for accidents and malfunctions? Time will tell, but this case may just spark a very complicated debate.