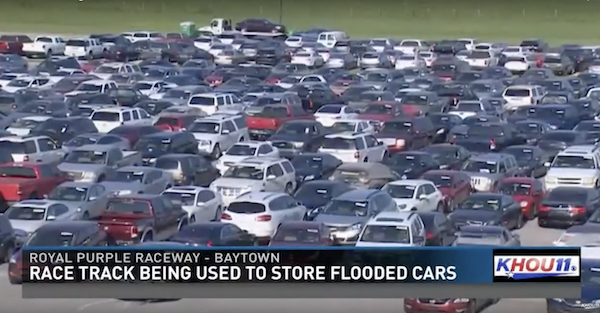 It’s hard to comprehend the amount of work that it takes to process an estimated half a million flooded cars caused by Hurricane Harvey. Sure, most of these vehicles have full coverage insurance and will be replaced by an insurance company, but what happens to the actual cars?

To begin to understand the amount of effort it will take to clear out all these vehicles from the Houston area, we have to look at what these cars will be considered after such damage. Most cars with any amount of water in the cabin end up being considered a total loss from an insurance company. The damage caused by water in today’s computerized and complex cars is usually so expensive to fix, it?s easier to just write a check and scrap the car.

What we are seeing are cars getting transported to large storage lots to be auctioned off. Managing the lots will be the two larger salvage auction companies, Copart and Insurance Auto Auctions. They are renting lot space all over as their Houston area lots are full.

There are so many cars that Copart has a contract with Royal Purple Raceway to store damaged cars before they are auctioned off. The drag strip is closed until the end of the year due to the amount of space needed.

Once all the paper work is approved by the insurance company, the car is ready to be sold. Vehicles are listed online before the auction for the whole world to see. Most will be sold in the U.S and either stripped for parts or crushed for scrap depending on the type of damage. Some could be repaired and titled if registered in the right state and fixed properly. Cars sold outside the U.S. may end up seeing the road again as some countries don’t have many laws restricting damaged cars from being titled and driven.

Cars that didn’t have insurance will likely be repaired if possible, and driven. These are the cars you need to look out for as their title will not be branded since a claim was never filed. Scammers are out there hungry for an opportunity, so beware and always get a pre-purchase inspection done by a professional.

Hundreds of drivers, insurance claim adjusters and auction personal are coming from all over the country for this and with Irma on its way, there doesn’t seem to be an end in sight.