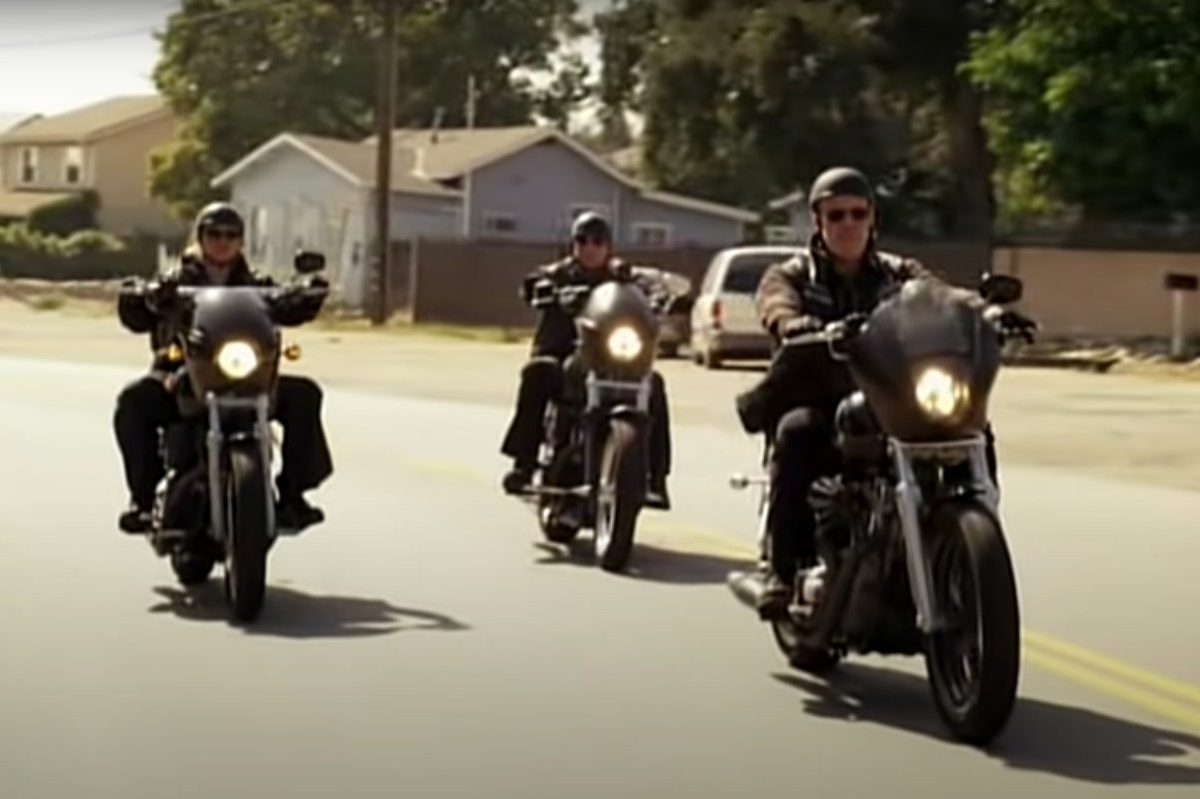 TV series Sons of Anarchy is just one of those shows that you need to see. Not only will the storyline have you hooked from the very beginning, but it’s even better if you already have a love for motorcycles. There’s nonstop action, and as the show progresses, you’ll experience the emotions as if you were actually part of the crew.

SOA follows the story of the Sons of Anarchy Motorcycle Club Redwood Originals in Charming, California, often referred to as SAMCRO, and these bikers certainly know how to ride in style. Kurt Sutter, the creators of the show, matched up the best custom Harley-Davidson motorbikes to match the personalities of the riders, and I’d say he did a pretty good job. That’s why we’re going to check out the coolest Harley motorcycles from the show.

Charlie Hunnam plays one of the shows main characters, Jax Teller, and Jax rides a badass Dyna. It sports a blacked-out paint job with a set of custom T-bars and a cool-looking reaper graphic on the side of the gas tank. His bike gets a good amount of screen time, but for good reason.

You have to love the folks that put in the time on their custom bikes. Although this was not Opie’s main ride, it was definitely one of the more stylish bikes that he owned. It was an ongoing project throughout the series, but he keeps the custom look with a splash of modern comfort.

Half Sack was only just a prospect in the crew, so his bike wasn’t nearly as decked-out as the others guys. The main thing that made his bike different was the fact that it was white, while everyone else rode black bikes. Mix that with the giant prospect patch that he had, and it was easy to see who was the rookie in the club. Regardless, it was still a really good-looking bike, so it had to make the list.

As the president of Grim Bastards, T.O. Cross definitely sported a bike that proved his importannce. His road glide bagger was customized from top to bottom. With paint matched tall handlebars and wheels, it was clear there was a lot of money spent on this machine.

Chibs is another member of SAMCRO that rocked a Dyna motorcycle. His bike doesn’t have the front fairing, but it’s got custom wheels, and he’s also got a pair of matte black Z-bars equipped to give it a pretty unique look overall. There’s small details added like the Saint Andrew cross patch on his saddlebags that bring the whole thing together.

Bobby was guilty of owning quite a few bikes, and among them was this beautiful custom chopper. It’s built on a hardtail frame, and it uses mini ape hangers, raked forked, a springer seat, and no front fairing. The bike was built from the ground up, and while it may not be the most comfortable bike he owns, there’s no doubt that it’s badass.

Played by Hollywood star Ron Perlman, Clay Morrow was another main character on the show and husband to Gemma, Jax’s mom. His Dyna Super Glide was fairly similar to Jax’s. With a big reaper graphic, custom handlebars, and a twin cam V-twin engine, it sounded extremely aggressive and was one mean bike to look at in the all-black color scheme.

The Mayans were the rival gang to SAMCRO, but they definitely had their hands on some sweet bikes, as well, including multiple Heritage Softails and a few Road Kings. It was clear that they rode bikes with different styling than the other clubs, but it’s hard not to respect these custom cruisers that normally showcased a good amount of chrome.

Piney was one of the elders of the group, and you witness his health start to worsen as the show goes on. Because of that, he normally rode with an oxygen mask, and he even had a spot on the back of the bike to hold his oxygen canister. It made a lot of sense for him to be riding a trike, and his passion to keep going gained him respect by everyone in the club.

Tig Trager was undoubtedly one of the darker characters, and this Dyna Street Bob matched his personality perfectly. With an all-black color scheme, it also included lots of skulls and spikes, making it pretty mean looking. I wouldn’t mess with someone that’s riding a bike like this.

WATCH: Jesse James: Where Is the Controversial Chopper Customizer Today?