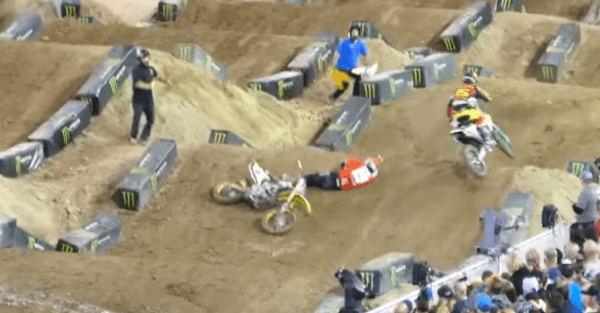 With the Monster Energy Supercross opener just days away in Anaheim, Autotrader/Yoshimura Suzuki announced that Justin Bogle will miss the race after an unspecified practice injury per RacerXonline.

The crash occurred over the off season and Bogle missed what was described as ‘significant time.’

?The off-season was rough on me,? Bogle said. ?I had a crash at the Monster Energy Cup in October, and then had a similar issue while practicing in Florida. The second crash set me back. It?s tough, because both crashes were freak accidents. That?s how it goes in this sport sometimes. I had high expectations coming into the 2018 supercross series. Unfortunately, I won?t be able to reach some of those goals now. I need to get my body figured out before I can get back to racing. I should be able to line up to the gate soon.?

The crash in October he is referring to was a scary one. Bogle collided with another rider and was knocked unconscious and sustained a concussion.

?We are bummed that Justin is going to miss Anaheim 1,” team manager Jeremy Albrecht said. “It?s the beginning of a new series and Bogle wants to start things off on the right foot. However, injuries happen in this sport. He will be evaluated after Anaheim. At that time we?ll have a better idea when Justin will line up.?

Hopefully Bogle can get healthy without missing even more significant time.