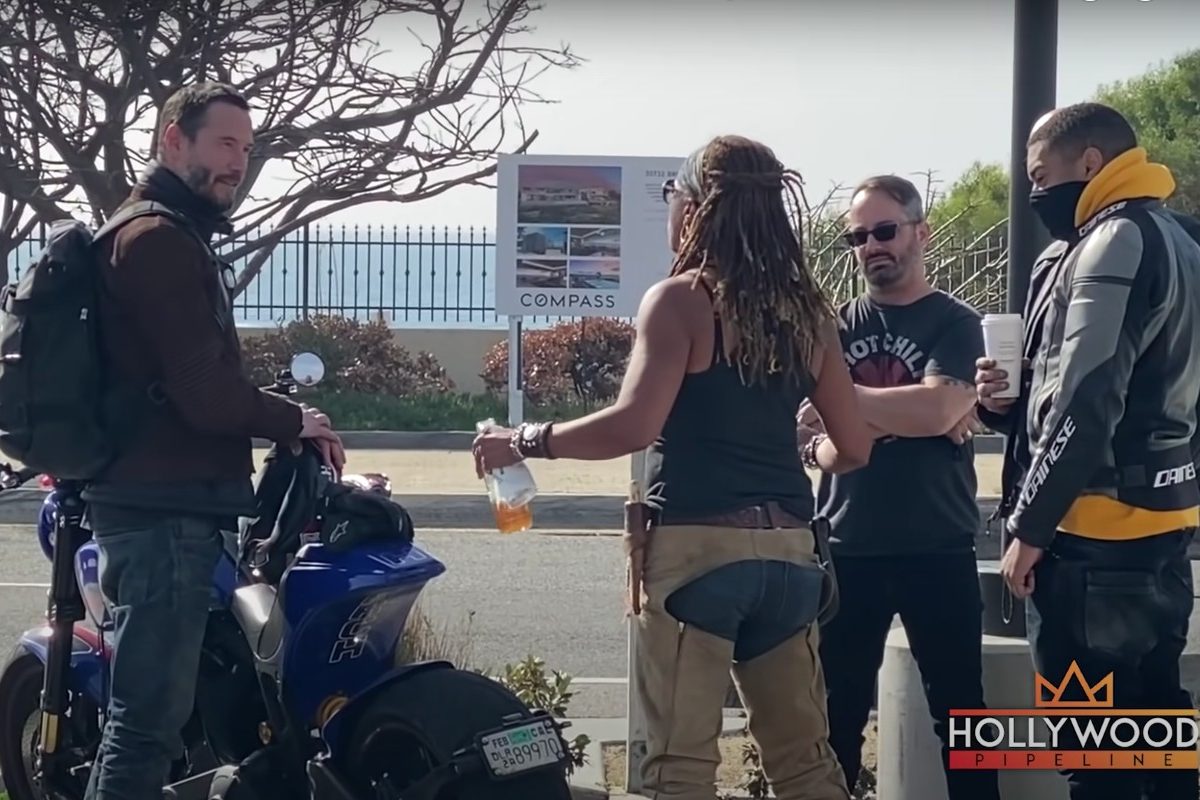 The scene is familiar for anyone who has ever slung their leg over a motorcycle: A guy, out for a ride somewhere in sunny California, parks his super-cool custom motorcycle somewhere in public. Within moments, fellow riders clad in leathers flock to him to talk to him about his awesome bike, which leads into a three-minute discussion about motorcycling, bike mods, and so on.

Except in this scene, the role of the “guy, out for a ride” is played by the one and only Keanu Reeves. He not only takes off his helmet to engage in a lively, friendly discussion with the fellow riders, but cranks up the bike and lets them hear it purr before he bids them a fond adieu. “Hollywood Legend” status confirmed.

So… Keanu Reeves Is a Bike Guy?

You didn’t notice the green 2004 Ducati 998 in The Matrix Reloaded? But Keanu doesn’t just ride — he helped found ARCH Motorcycles.

In 2011, Keanu Reeves tapped his buddy and bike builder Gard Hollinger about a custom motorcycle. One thing led to another, and that single bespoke bike became a motorcycle company focused around custom production sport cruisers.

ARCH Motorcycle Company produces some of the most coveted performance cruisers in the US. The bikes are gorgeous, blending exotic good looks with ideal performance. ARCH motorcycles are made with custom and high-end aftermarket parts, with over 200 of those parts manufactured in-house at the motorcycle brand’s headquarters in California.

The ARCH KRGT-1 has a $85,000 price tag, which puts it out of range for many motorcyclists. But, we can drool over the specs for free.

The official classification of the KRGT-1 is “American performance cruiser,” which means it combines a long-distance ready ride with loads and loads of power. The not-so-secret ingredient is custom ergonomics. That’s right — as is the case with most of the bikes produced by ARCH Motorcycle Company, each KRGT-1 is specifically fit to its individual rider. It’s ok to get a little teary-eyed at that prospect, but let’s continue with the specs.

The powerhouse here is a 124 CI, 2032cc S&S Cycle T124 45 degree downdraft fuel injected V-Twin engine. ARCH has created its own 6-speed drivetrain for this beast, which includes a dry clutch and compact, high torque main-shaft. Construction is billet and tubular steel frame with machined aluminum sub-chassis and billet aluminum fuel cells. Riders will appreciate the significant amount of collaboration between Ohlins and ARCH on the fully-adjustable rear shock and fork.

What makes this a custom bike is the fit and finishes. ARCH pays close attention to riding position, with plenty of adjustable fittings and a forward control foot positioning. No two KRGT-1 will ride alike, though they’re all outfitted with the same high-end parts and pieces.

…And Then There’s the ARCH Method-143

The Method-143 is hand-assembled in Los Angeles. It’s a whole lotta sexy carbon fiber, leather, and aluminum sculpted into a mono-cell chassis. ARCH intends to create only 23 of these beauts, so if your name isn’t already on the list, read on.

The carbon fiber chassis includes the fuel cells, air induction system, and a filtration process that were all engineered and produced in-house. It’s lightweight yet sturdy. Aggressive yet aesthetic. It’s a jaw-dropping, pants-wetting accomplishment of design and machinery.

It’s got a 143 CI, 2343cc S&S V-Twin engine, but this time a Cycle T143 45 degree downdraft fuel-injected version that adds 300ccs. It has a longer wheelbase than you might expect, carbon fiber fenders, Michelin power tires…and did we mention how unbelievably cool it looks? The bodywork is just downright sultry.

So, maybe Keanu Reeves doesn’t mind taking off his helmet and chatting about his motorcycle for a while, because he knows his bike is beyond cool. While we mere mortals may never have an opportunity to own an ARCH motorcycle, we can all dream of a world in which we take our custom performance cruiser to the open road to catch some wind. And we can all dream of being as cool as Keanu, too.