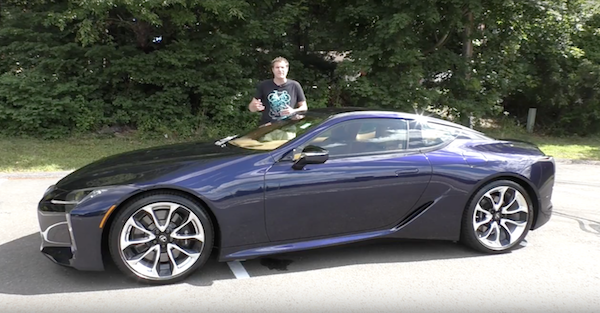 Ok, in all fairness it does say Lexus, not Toyota, but the question remains. Will anyone out there be willing to shell out over $100,000 for a luxury sports coupe built by Toyota? The Japanese company sure hopes so and in Doug DeMuro’s latest video he shows us what the new LC500 is all about.

Doug starts off inside the LC500 where he finds one of the most well built interiors known to mankind. Everything in the LC screams quality including all the rock solid buttons, switches, handles and even a comfort pad to rest your hand while navigating the infotainment screen.

The exterior styling of the Lexus gives off the feel of a concept car that’s never actually going into production, yet here we are. The car is very futuristic looking, sporty and its massive meshed grill looks like a sharks mouth about to devour the entire ocean.

Although the LC500 is a sports car, it’s hard to combat its 4400 pound curb weight. Its naturally aspirated 5.0 Liter V8 sends 471 horsepower to a 10 speed automatic transmission but that’s only good for a sprint to 60 mph in 4.6 seconds. Although its performance is subpar compared to others in its price range, you’d never know it by hearing the car. The exhaust note is nothing less than intoxicating and truly makes you wonder if this car is actually a Lexus.

Next up was a test drive. This goes exactly how you’d think. The car is a quiet, well built luxury car that’s not blindingly fast and handling is just ok. This seems like the perfect luxury cruiser that you would drive across country with one other person. The back seat is completely useless, at least for a 6’3 guy named Doug.

In the end, Doug gives us his “Doug Score,” and not surprisingly gives the Lexus his first perfect score in the quality category. The overall score was a 68 which puts the LC very high up on his chart. The Lexus is right under the Tesla Model X and right above the a Ford Raptor. Not sure exactly what this means, but that’s not bad company at all.