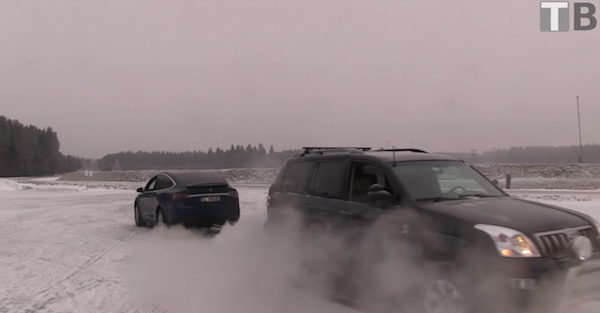 Here’s the answer to the question you never really knew to ask. Who would win in a tug-of-war between a Tesla Model X P90DL and a Toyota Land Cruiser.

The answer is the Tesla, by a pretty insane margin. It’s unclear how this competition got started, but it ended with a couple of very concerned drivers after the Tesla beat the Toyota so hard it wouldn’t start after the competition.

Fortunately though, it doesn’t seem that the damage was permanent. The Land Cruiser was up and running by the end of the video.

Then you see the end of the video and it all becomes very clear. We already knew the Tesla had the power advantage, but a tug of war is all about traction. Not only did the Tesla have more weight, but it also had studded tires vs the Landcruiser’s normal ones.

We want to see a rematch with the cars on more equal footing.

Related: These unbelievable tug of wars are truly crazy