One of Jerry Lewis’ last great movie scenes involved a sheriff’s car, a beat up Honda, and an explosion 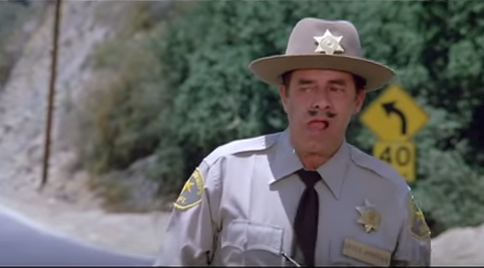 Jerry Lewis, one of the funniest comedians to ever live, sadly passed away today at the age of 91.

His family, in a statement to the Las Vegas Review Journal, said, “Legendary entertainer Jerry Lewis passed away peacefully today of natural causes at 91 at his home with family by his side.”

Statement: "Legendary entertainer #Jerry Lewis passed away peacefully today of natural causes at 91 at his home w/ family by his side."

He truly was a legend, from the days of vaudeville, to his pairing with Dean Martin, and later in his career, the annual Jerry Lewis Labor Day Telethon. Even after the bulk of his movie career had waned, he still played his trademark manic comedy roles, and one in particular comes to mind,.

In the 1983 movie Smorgasbord, Lewis played a bumbling (what else) sheriff that stops a dinky little Honda and ends up  blowing up his own cruiser.