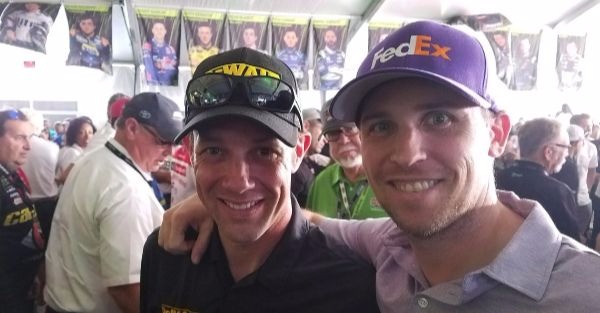 It’s no secret that NASCAR drivers take themselves quite seriously when out on the race track, and for good reason. Who wants to drive alongside somebody who’s acting like a clown when you’re racing side-by-side at speeds up to 200 mph?

However, once the race is over, many drivers loosen up and act very differently — almost like normal everyday people. So, to gain more prospective about it’s really like inside the NASCAR community, For The Win polled several Cup Series drivers on a number of topics and some of the answers were downright surprising.

For example, when the drivers were asked who made the biggest impact on the sport, most drivers pointed towards obvious candidates like Dale Earnhardt Jr. and Danica Patrick for their ability to attract more fans to NASCAR. But, when the subject of messing around with other drivers and pulling pranks came up, that’s when some of the most interesting comments were made.

Take Kevin Harvick for instance. While he comes across as very serious and professional during his TV interviews, veteran driver Clint Bowyer said the two vets had prank wars nearly every week when they both drove for Richard Childress Racing.

Then, when Landon Cassill was asked by For The Win which driver he would like to prank the most, he pointed his attention towards a familiar target.

If you didn’t catch the Martinsville race on October 29th, then you probably missed Hamlin wrecking Chase Elliott near the end of the race to take the lead. For his actions, Hamlin was booed profusely by fans at the track and also was criticized on social media.

In response, Hamlin shared a message stating that he’d participated in approximately 10,000 races since he was seven years old and that was the first time he’d ever wrecked the leader.  Seeing  a slight error in Hamlin’s math, Cassill took the opportunity to troll Hamlin on social media and got a strong response from fellow drivers.

Denny is my hero. This man out here averaging 300+ races a year for the past 29 years https://t.co/DKq3WpDA2l

Landon, @DirtyMoRadio is ready for you to host your own podcast. https://t.co/02FlXFHfh0

It looks like Hamlin better watch his back when the drivers reconvene at Daytona in February. Cassill seems to have unfinished business with the driver of the No. 11 Toyota Camry.