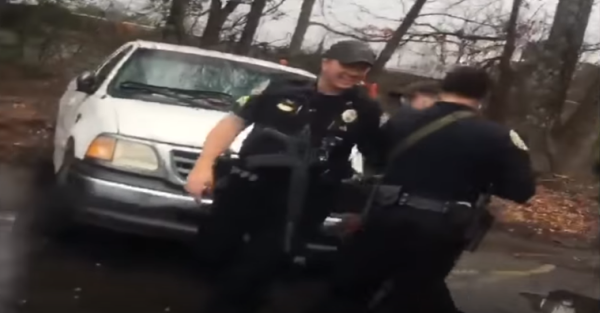 You know your Acura track car has peaked when its anti-lag system causes the police to show up armed to the teeth.

Enrique Mendoza found himself staring down a group of very well armed officers in Tucker, Ga., after he brought his car into the shop to do some work before taking it up to Commerce, presumably for a race.

The officers were visibly on alert and repeated the question, “who has the gun?” multiple times, continuing on to say they “heard cannons going off.”

Mendoza repeatedly told police that there was no gun before eventually pointing out that what they heard was probably just his car. There was some initial doubt, but after testing the car in front of the officers and showing that it did, in fact, sound like a cannon, things calmed down considerably.

Mendoza posted a description of the incident on Facebook,

“I used launch control while putting my car away and the cops thought it was someone firing an ak47 and turned up with guns drawn, they were very good about the situation once they realized it was actually the car.”

It might have been better to lead off with, “hey, my car sounds like a gun sometimes,” but fortunately, everything still turned out alright.

Related: Worker in Vegas finds out just how loud NASCAR cars really are