Watch This Snowmobiler Pull off a Hilarious Disappearing Act 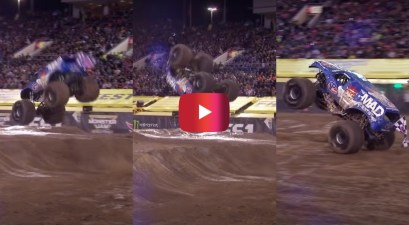 The First Monster Jam Front Flip Was One Happy Accident

When Sean Lee and his buddy Aaron went snowmobiling over in Secesh, Idaho, they probably didn’t know they’d be getting a few laughs and a viral video out of the experience. But, that’s exactly what happened when Aaron played fast and loose on the edge of the trail, eventually finding himself buried under several feet of snow.

Lee, who filmed the whole thing, damn near choked on his own laughter after witnessing the incident. Thankfully, Aaron was able to find some humor in the whole situation as well, or else that would’ve made for a much different video.

Per Sean Lee via ViralHog:

This video took place during a winter snowmobile/Timbersled riding vacation on 2/26/19, staying at the infamous Bob Dodge cabin. The area is known for great snowmobiling, with vast areas to explore. Aaron was dug out of the snow with no issues. The video has provided a lot of laughs.

I mean, that’s just good times all around. Barring Aaron’s deep snow debacle, that snowmobiling run was probably a pretty peaceful ride. Just look at the trail they were cruising down? Like something out of a movie. It doesn’t really get much better than that.

Watching that video would probably make most folks want to hit the trails in their own ride. Of course, you’d need to make sure you had the right equipment for the job, like a solid helmet and pair of goggles. You could even get a fancy combination deal, like the Dual Visor Modular Full Face Snowmobile Helmet With Heated Shield and Breath Box from Typhoon Helmets.

I’ll tell you one thing: If Aaron didn’t have top-of-the-line snowmobile equipment before his deep snow dive, he definitely got some afterwards.

Read More: It’s All Fun and Games Until Your Truck and Ice Shanty Sink into Lake Michigan