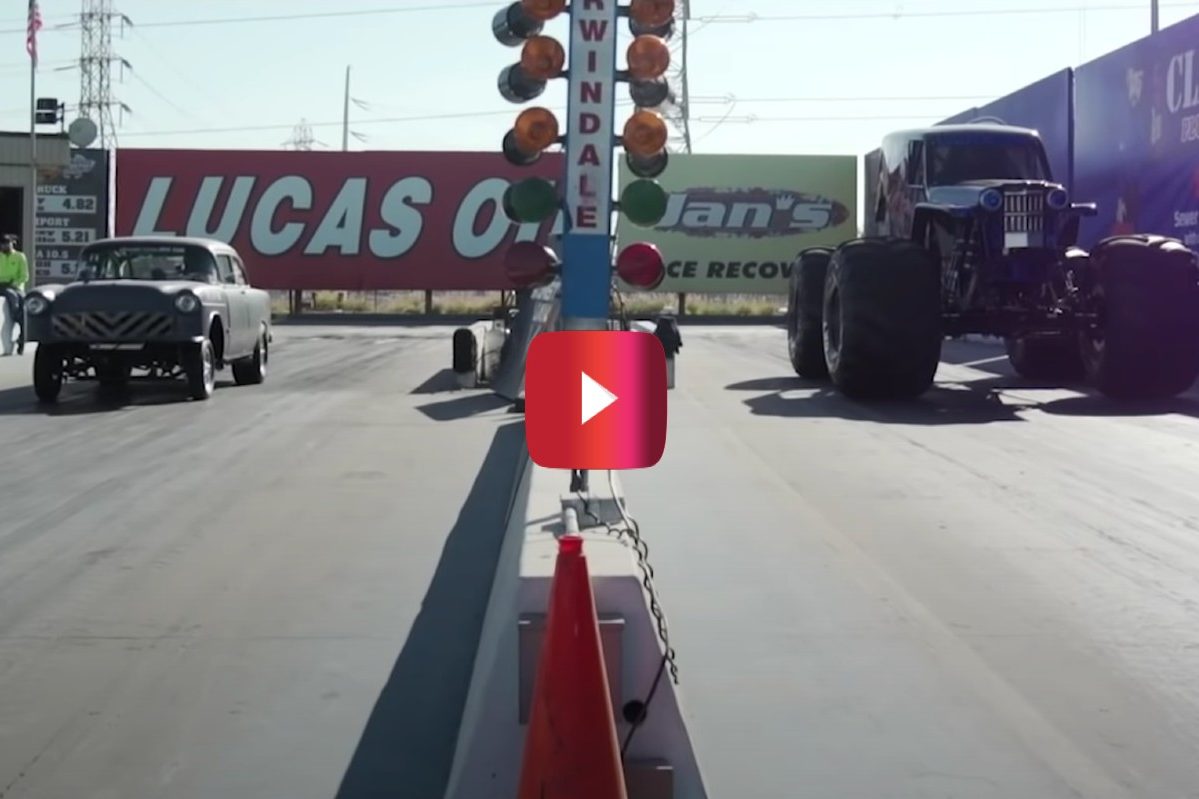 Monster truck vs hot rod: Who would win in this high horsepower drag race? Well, the guys over at Hoonigan decided to find out the answer to that question.

The Hoonigan crew consists of a whole lot of gearheads and they’re constantly having fun with race cars and drivers from all types of motorsports. They called up Ryan Anderson, driver of the Monster Jam truck Son-uva digger, and challenged him to the race down the drag strip. Ryan, of course, accepted their challenge.

Ryan Anderson is the son of Dennis Anderson, the monster truck driver who introduced Grave Digger to the masses. Ryan has some serious talent behind the wheel just like his dad. He’s a five-time world champion, and he’s competed in eight Monster Jam world finals. This was the first time he took the truck drag racing, but he definitely pushed that thing as hard as he could to win these races. Hoonigan’s Jon Chase is the driver of the turbo hot rod competing against the truck. It’s a 1955 Chevy Bel Air gasser commonly known as “Tri 5 by fire,” and it’s packing tons of horsepower. Let’s see how the race unfolds in this crazy video!

The guys at Hoonigan described seeing this race as a real-life childhood dream. Just listen to how loud that monster truck is as it screams down the drag strip! That’s a combined total of around 2000 horsepower going down that track, and it’s absolute madness. I have to admit, these races were closer than I thought they would be.

As they get the green light on race one, Ryan Anderson struggles to find grip as the four-wheel drive monster truck spins its tires and bounces hard. It’s pretty amazing that he’s doing the race with off-road tires. Where are the giant drag slicks when you need them? Even though it spun the tires pretty hard, it was still pretty amazing to see how fast that truck was able to move. Jon Chase takes the win for race one though.

Race two brought the same outcome as Jon Chase takes the win in his Bel Air. It’s not really that surprising, seeing as he’s literally driving a drag car, but it’s still pretty mind-blowing to see how well this monster truck is actually competing. The trucks spins its tires pretty hard looking for traction and finds it about halfway down the track. Those skid marks go on for quite a while.

A surprising result came from race three. Chase spins the tires as he launches, and the monster truck took full advantage. Anderson gets the best start he’s had out of the three races and powers down the drag strip to take the win. By the time he got to the end, he was flying! I can’t imagine how cool that must have been to see in person. Just goes to show that if you have 1,500 HP in any type of vehicle, you better be holding on to that steering wheel. Now, as Hoonigan would say….THAT’S A WRAP!

WATCH: Paul Walker: The Late Actor?s Legacy Will Outlive His Massive Net Worth