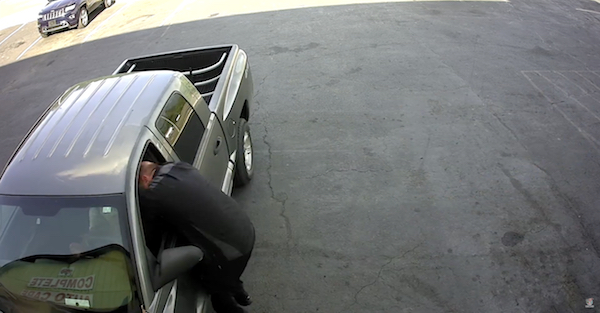 Tim Rodifer is due for employee of the month at Johnson City, Tennessee’s Mr Transmission — even though he owns the place.

Rodifer attempted to stop a thief from stealing a truck that was waiting to be serviced at his shop. The whole ordeal was captured from multiple angles by security cameras at Mr Transmission, and  WCYB-TV interviewed him after the ordeal.

Rodifer said he was working on the truck when he went back inside his shop for paperwork, and the suspect dashed to the truck, “As if he was sitting across the street waiting for an opportunity,” he said.

Rodifer ran toward the truck and tried to dive through the window to stop the suspect. But when the suspect threw the car in reverse, it dragged Rodifer before he was thrown to the street. He suffered cuts and bruises but was otherwise OK.

Some 100,00 views and thousands of shares later, police were able to identify the suspect and take him into custody.

Now the suspect, Cody Smith, is in custody in suspicion of carjacking, aggravated assault and driving without a license, according to WCYB.