Suspected thief has a real bad day. First, the getaway car leaves and then, the angry nanny gets her 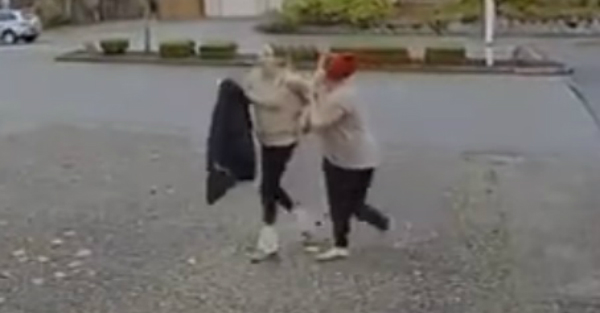 With the influx of packages being delivered during the holiday season comes an increase in opportunities for package thefts.

The increase in both has led to many people using surveillance systems to catch the criminals in the act. In Everett, WA, one would be package thief found out the hard way that crime doesn’t pay.

Kate Anderson is the nanny of a one-year-old and happened to be watching the Ring doorbell camera as a package was delivered to the home she works at, according to KIRO7 Seattle.

RELATED: Purse snatching scooter-thieves did not count on this guy saving the day

Not even 10 minutes later a car pulled up, then a woman emerged from the vehicle and approached the home. Anderson saw the woman through the window, and knowing a lot of packages get delivered to the home, she realized something wasn’t right.

“I saw her bending and picking it up, and they get a lot of packages,” said Anderson, according to KIRO7. “And I knew.”

The camera caught everything as it unfolded. As the woman tried to get the package back to her getaway car. It sped off without her, and left her behind. Anderson ran outside after the woman and apprehended her until authorities could arrive.

About eight minutes later, the Snohomish County sheriff?s deputies arrived and arrested the woman on outstanding warrants. The deputies identified the woman as 29-year-old Rhieanna Schindler of Everett. It was determined she had outstanding warrants for drug possession and theft, and has been arrested more than 20 times, since 2010, as reported by the sheriff’s office.

The sheriffs department doesn’t recommend trying to apprehend suspects. But, when Anderson was asked if she’d do it again, she didn’t hesitate to answer.

“I think I would,” said Anderson as she laughed. “I didn’t ever feel like she was a threat to me, so I think I would’ve handled it the same way.”

“Yes, because it?s just not okay to go around doing that,” she added. It’s so not okay with me.”

Schindler has yet to be charged. As far as the package that was taken in the getaway car, it was for the one-year-old, who was sleeping as this all transpired.