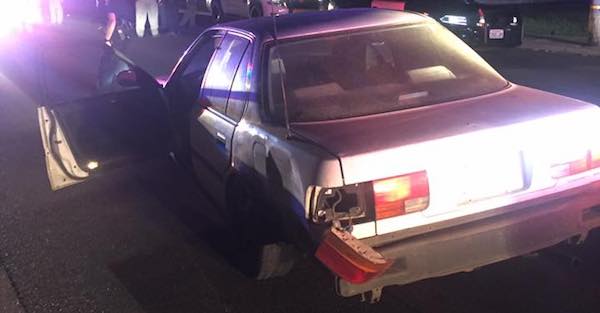 It’s never a good idea to tempt a California police officer by asking him or her for directions . . . in a stolen car, specifically the most stolen car in America.

Tuolumne County Sheriff posted on its Facebook page that 28-year-old Ryan Ashlock stopped  Deputy Vince Lee and asked for directions to Sonora, just 15 minutes away. Deputy Lee obliged but also ran Ashlock’s plates, which is when he discovered the Honda Accord stolen.  Lee called for backup, a chase ensued, and Ashlock was eventually caught.

The release claims Ashlock rammed Deputy Lee’s car and then ran over some spike strips.

At the end of the day Ashlock was arrested and booked into jail  with “vehicle evasion, possession of a stolen car, and assault with a deadly weapon against a law enforcement officer.”