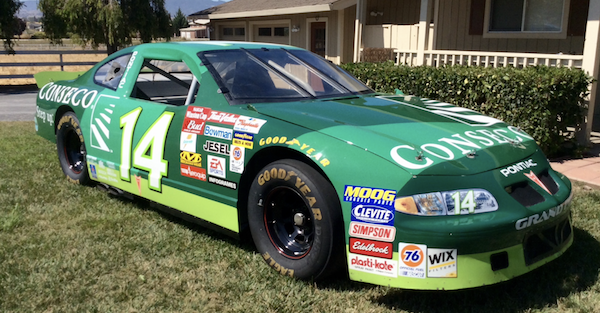 If you’ve ever fantasized about owning and driving a real stock car then here’s your chance. Up for sale on bring a trailer is a 2000 Pontiac Grand Prix that was raced in the 2000 Winston cup by Dick Trickle and Mike Bliss. Its now in California and is being sold private party.

This green Pontiac is powered by a 358 jasper V8 connected to a T-10 4-speed. It’s listed as in race condition and looks complete, even sporting a sweet K&N sticker under the hood. Everything has been left as it was during its racing career aside from the removal of the original side-mounted quick-fill fuel system. It’s listed as having a good set of slicks, original seat and factory Simpson harness along with a working fire suppression system.

This is the real deal and you can actually own this car, just don’t expect to cruise this to the next Cars and Coffee as nothing about a real stock car is street legal. However, in the right little town it wouldn’t be too far fetched to see this thing making a few passes on a lonely country road.

The bid price at time of publishing is just over $2,200 but it’s hard to tell what it will eventually sell for. This wasn’t a particularly successful car with a well known history so it will likely sell to someone who actually wants to race the car, which would be awesome. According to the ad, the car has not been raced in any official races in 5 years and the current owner has used the car only once in the last year. If this car could talk it would be begging to be put back on a track where it belongs.

Hopefully this old Pontiac ends up in the right hands and those hands could be yours.

Related: You missed out on owning your very own NASCAR