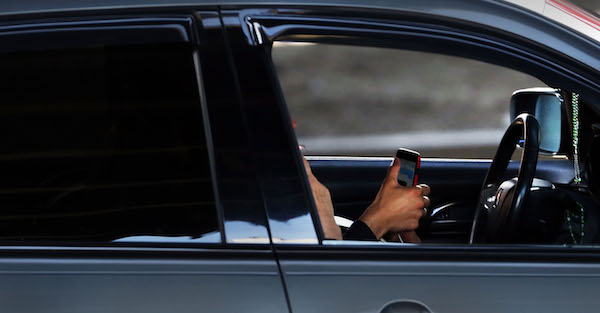 Spencer Platt/Getty Images
NEW YORK, NY - APRIL 30: A driver uses a phone while behind the wheel of a car on April 30, 2016 in New York City. As accidents involving drivers using phones or other personal devices mount across the country, New York lawmakers have proposed a new test called the Textalyzer to help curb mobile phone usage behind the wheel. Similar to a Breathalyzer test, the Textalyzer would allow police to request phones from drivers involved in accidents and then determine if the phone had been used while the drivers operated their vehicles. The controversial bill is currently in the early committee stage. According to statistics, In 2014 431,000 people were injured and 3,179 were killed in car accidents involving distracted drivers. (Photo by Spencer Platt/Getty Images)

Most people make resolutions for the upcoming new year, and they can range from getting in better shape to eating healthier.

Drivers in the United Kingdom answered what issues they want to address for next year, and about a quarter of the responses involved people wanting to check tire pressure and oil levels more often.

According to Car Scoops, the research was done by Young Driver ? which is the country’s largest pre-17 driving school. About 17 percent of drivers said they want to improve at parallel parking.

Surprisingly, 15 percent of drivers admitted they are bad at reversing. We wouldn’t have guessed so many people would admit they needed to fix that above all else, but it’s a necessary skill to have.

Here are the rest of the results, which included 16 percent of people wanting to conquer their fear of driving on highways.

Other responses included not getting road rage (14 percent), not being on the phone while driving (13 percent) and to speed less (11 percent).

Being on the phone while driving might be the habit most difficult for most people to kick, but it’s among the most dangerous things you can do while driving.

What’s on your driving resolution for 2018? Let us know!