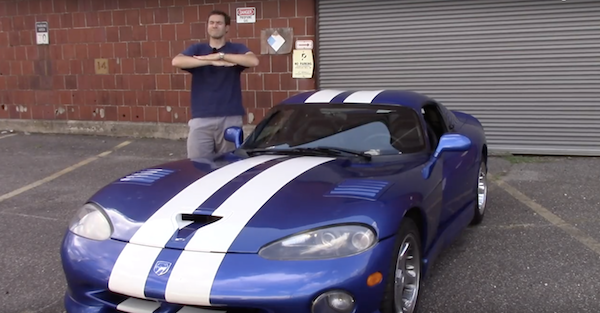 If you grew up with a huge Dodge Viper poster on your wall, it says two things about you. One, you’re a child of the 90’s. Two, you have something in common with YouTuber/Writer Doug Demuro.

In one of Doug’s videos this past week, he says goodbye to his 1997 Dodge Viper GTS. He bought this car about a year ago as one of his “Doug Cars.” Every year Doug buys a couple cars that are voted on by his viewers. He then puts the vehicles through a series of highly scientific tests to formulate very specific test results in order to determine if the car was, good. Here are some of those tests.

He brought the car to Home Depot once to see how much stuff he could fit in the back. He drove the car around in the city to determine how horrible its fuel economy was. He drove the car in the snow to see if a Viper is a good snow vehicle; it is not. He showed us how easy it is to open the hood and that when you hit the brakes, the car basically screams, “Viper!”

All kidding aside, Doug’s videos do a great job of showing you what its really like to own a Dodge Viper. This is the stuff you can’t find in a sale brochure at the dealer.  These aren’t numbers you can put against competitors.  Well, except his dyno video, that does a pretty good job of producing solid physical evidence.  His year with the Viper shows the good, the bad and most importantly, the weird quirks and features because after all, its still a 90’s Chrysler product.

If you’ve ever thought about owning an older Dodge Viper check out the video and get a fresh perspective of the whole Viper lifestyle, Doug Demuro style.