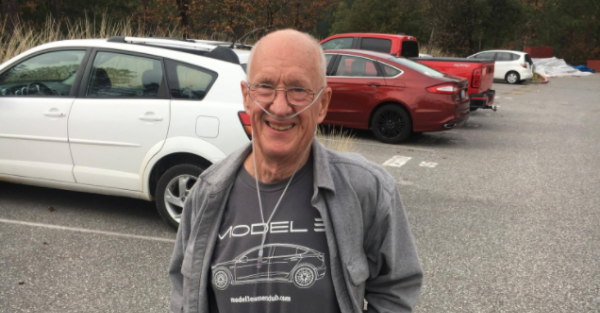 Tesla’s Model 3 has been a long while coming since being plagued with delays, but production is reportedly ramping up and deliveries are finally being made as the cars roll off the line. Tesla buyers have had their patience tested, but one man had a better reason than anyone to want his Model 3 delivered ASAP.

Electrek reported that a man known by his Forum screen name ‘Graniteds’ posted this:

?Well, I?d love to see November deliveries! I have a terminal stage 4 cancer and have been told I may only 3-4 months to live. The last thing on my bucket list is our Model 3 and I?d like to have a few days to experience and enjoy it. I wonder if there is any flexibility in the que??

With such limited product, no one knew if Tesla could fulfill the man’s last wish. So forum members began working to at least give the man some time behind the wheel of someone’s Model 3 even if his would not be delivered in time. Fellow forum member Bonnie Norman knew a way, and began to make plans as she detailed on her Twitter account:

When she first reached out, the man was understandably weary of giving out his information:

2) I had to convince him to give me his contact information. I'M NOT A SCAMMER, dammit!!

She eventually convinced him and was able to set him up with some time with a friend and Tesla employee’s car.

3) I asked @DevinaKSingh, a friend who works for Tesla & owns a Model 3, if she'd show off her car so he could experience it at least. On 11/25, she was at his house, insisting he drive the car hard. (Check the Tesla grin.) pic.twitter.com/5mIEQs1Hle

The pictures and story were sent to Tesla and within a day, the man was configuring his own Model 3 to prepare it for delivery. On December 13th, about a month after the story was brought to Tesla’s attention, the man’s car was delivered, along with a factory tour and plenty of happy Tesla employees happy to be a part of the heartwarming story.

5) HE TOOK DELIVERY TODAY!!!! And a huge crew turned out to make this a crazy special day <3.

7) Oh! And he and his wife have their new Model 3. Lots of tears around. Merry Christmas, Happy Holidays. My heart is full. Thanks everyone @Tesla. Thanks especially to @DevinaKSingh and @jonmcneill . We make an awesome team. pic.twitter.com/QChhxKX8hV

Good on them for doing everything they could to help complete this man’s bucket list.

Related: Tesla stunned everyone by unveiling a new car with an incredible new feature