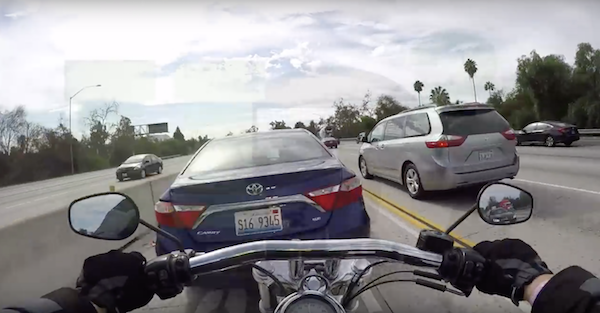 Riding a Motorcycle can be a very dangerous method of getting around town. Most of the time, it’s not the motorcyclist, but the others on the road that make it so dangerous. All to often, we hear of avoidable accidents in which a car driver is not paying attention and switches lanes quickly not realizing a motorcycle is in the adjacent lane.

In this video posted by HD2, a motorcycle rear ends a car that changes into its lane quickly. The rider is ok and actually lands on the trunk of the car while its still driving.

At first, this seems like the driver of the car’s fault and it definitely is, but reading the comments will make you watch a second time. Apparently, this particular rider has made videos in the past where he is riding around egging people on and generally putting himself in troublesome situations to make a good video. Most of those have been deleted, but we all know nothing online goes away completely and some viewers posted them in the comments.
In this video, he is traveling about the same speed as traffic except he does not slow down when clearly everyone else is.  If the car he hit didn’t switch lanes he would have surely blasted by a lot of other cars that had slowed down again putting himself at risk.  Although the car illegally turned into the HOV lane over a solid line, riding so much faster than surrounding traffic is asking for trouble.
Hopefully, this video serves as a reminder to all to be mindful of your surroundings and to slow down.
Related: Speeding Motorcycle Crashes and Winds Up on the Trunk of Someone Else’s Car