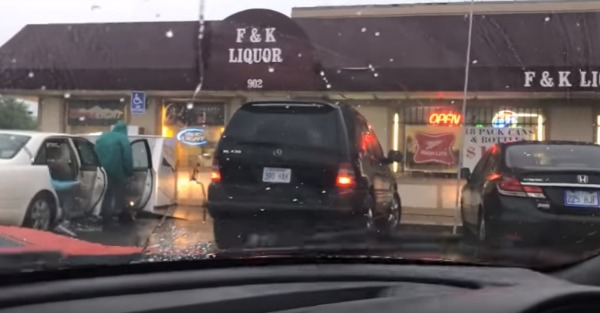 Tyler Hoover of Hoovies garage recently made a video giving us the story of his 2000 Mercedes ML55.  He bought the car a year ago and it’s one of his best buys which is saying a lot considering some of Hoovie’s other purchases.

He bought the ML for $3,500 and then proceeded to opt for basic insurance coverage. Normally, that’s what you do with a cheaper car, especially if you live in the Kansas suburbs like Hoovie and aren’t at a huge risk of theft like you would be in a worse area.

Hoovie was on cloud 9 after getting away with only a few inexpensive repairs on the 17 year old AMG. He rewarded the truck with a complete detail. That’s when everything went downhill.  Hoovie explains that the detailer left the truck running with the heat on in order to dry the carpets after shampooing them. You can probably imagine where this is going.

The ML was driven right out of the detail booth and kicked off a search by not only the police, but Hoovie himself. He drove around aimlessly for days looking for the truck. After posting on social media, he received some tips on its location. After a close call that saw the thieves escape after a high speed chase, the cops eventually found the truck abandoned.

Check out where he found the truck and what was left in it.  This would only happen to to Hoovie.

Related: Idiot Car Thieves Wreck Three Hellcats After Barely Driving a Mile Away From the Scene of the Crime