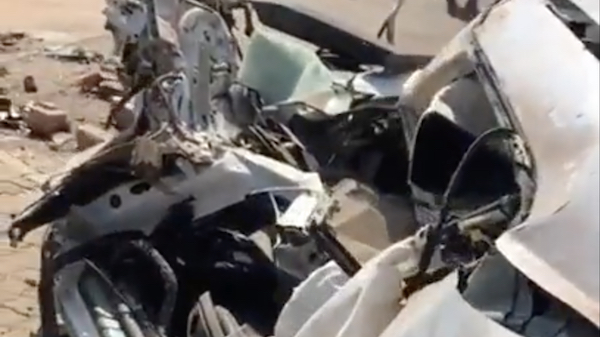 It’s a miracle that anyone could survive this crash. The grainy security footage shows an Audi TT taking flight in Sandton, South Africa, going through a sign and landing in a mass of dust and wreckage. The woman who was driving the car is currently in critical condition and the whole incident was caused by a series of unclear events. The crash is still under review.

According to the South African news agency ER24:

“Upon arrival, paramedics found a wrecked performance vehicle lying next to a wall. The body of a woman was found lying a short distance behind the vehicle. Paramedics assessed the woman and found that she had sustained numerous injuries and was in a critical condition.”

This is an awful accident, and hopefully the driver will pull through. This is a terrifying example of what cars are capable of.

Related: Here’s the crash and police chase that preceded the nurse being fired in Utah