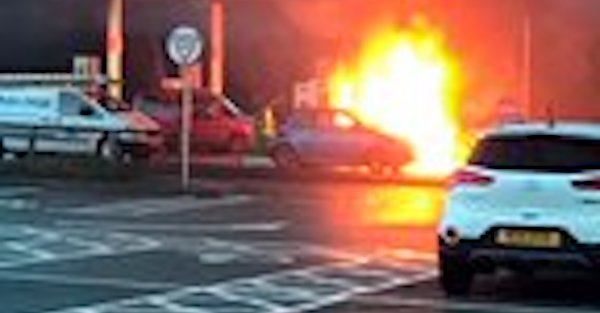 A woman barely escaped her Smart car alive after a design flaw led to her pumping fuel into the air intake.

It’s not as ridiculous of a mistake as it sounds. The 2005 Smart ForTwo that 54-year-old Julie Nicklin was driving is equipped with two very similar ports on both sides of the car. As Jalopnik notes, the intake looks almost identical to the gas filler on the other side of the car, and even has a plastic cap you can remove. Of course, the gas tank commonly regarded by most drivers as the appropriate place for gas to go, since if you mistakenly pour fuel into your intake, the car is going to have some severe side effects.

In this case the Smart car burst into flames almost immediately after Nicklin started the engine. Fortunately for her, Brian Turner was nearby and responded quickly to the impending disaster, pulling Nicklin out of her car and bringing her to safety. Turner was just in time too, because the gas pump next to the car quickly joined the inferno that was once the Smart car.

Even though the design flaw was fixed in later models, it might have played into the reasoning behind pulling the car from the market.