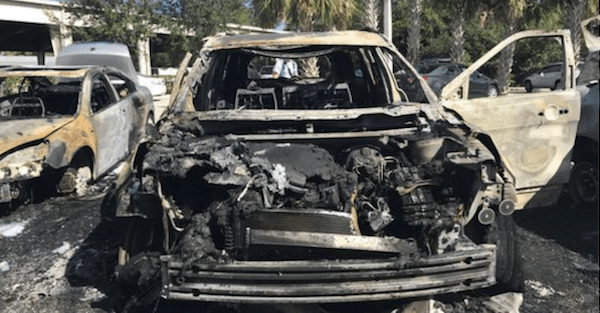 Its all fun and games until little Billy’s RC car burns down the family’s real car.

According the tcpalm.com, an RC car caught fire in the back of a Ford Explorer at Halpatiokee Regional Park in Stuart, Florida last Sunday. The owner immediately removed the Traxxas RC car after noticing it was burning, but unfortunately the fire had already spread to the headliner.

Before firefighters could arrive, the blaze had traveled from the Explorer to the two car parked next to it. If this wasn’t bad enough, one of those cars had gun ammunition in it. As the firemen started to put the fires out, the ammunition started going off sending shells all over the parking.  All three cars were completely burned to the ground, and considered a total loss.

This all happened next to the parking lot of a roller rink where kids were playing a hockey game, and luckily no one was hurt. Looks like someone will be doing some Black Friday shopping at a toy store and the car dealer.