According to test results, you have a great chance of getting hurt — or worse — driving this car 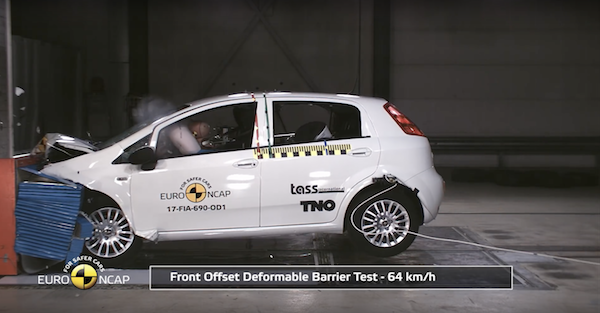 The Fiat Punto is a “supermini” car sold outside of the U.S., and it comes in many different flavors. They make a Grande Punto, a Punto Evo and best of all they make a Punto Pop that Top Gear Magazine named “The worst cars you can buy right now” in 2014. The current generation Punto debuted in 2005 and is still being sold new in the UK.

Back in 2005, the Punto scored very well in the Euro NCAP crash test receiving a 5-star rating for adults and a 3-stars rating for child passengers. When you consider that in 2005 the iPhone was still two years away from being released, you begin to realize how outdated this car is. To prove this point, Euro NCAP just tested the Punto against it’s more modern and more strict crash tests. The Punto scored zero stars which makes it the first car to ever do so poorly.

The test results this time around were pretty horrific. The Punto scored just  51 and 43 percent in adult and child occupant categories respectively. When it came to the pedestrian category, the Punto took home a failing grade of just 52 percent. It’s no surprise that the ancient relic scored zero points in the “safety assist” category. This scores cars on advanced safety features like blind spot assist and automatic emergency braking. The closest feature the Punto has is a seat belt reminder.

Fiat Chrysler Automobiles UK had this to say according to carthrottle:

?Safety is of the utmost importance to the FCA group. When Punto was launched 12 years ago, it was the first 5 star Euro NCAP car in its class. The importance of safety to the FCA group is demonstrated by the number of new models achieving 5 stars, for example Alfa Romeo Giulia, Alfa Romeo Stelvio and the Jeep Compass.?

Basically, don’t buy a Punto, or ride in one or walk next to one. Buy an Alfa Romeo Giulia instead!