An hour after putting down $288 thousand, a man’s new Italian exotic is unrecognizable 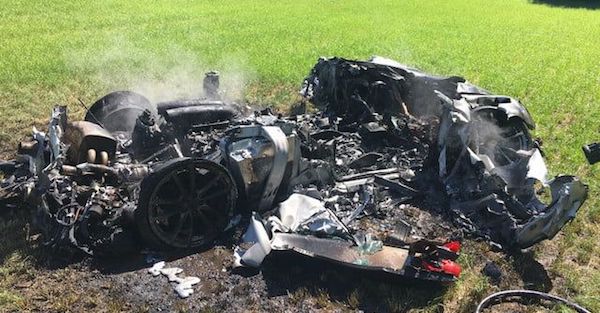 Your day is going to be alright, because no matter what, you aren’t going to screw up so bad that you’ve wrecked your brand-new Ferrari within the same hour of buying it, unless you actually do, in which case, sucks to be the low bar . . . .

A man in South Yorkshire let the joy of purchasing a Ferrari 430 Scuderia go right to his head. He picked up his new prized possession and immediately headed for the M1, which was slightly damp, because it’s England, and it rains there.

Somehow he lost control of the car, which soared off the road and crashed into a nearby field. The car, which was once pristine and beautiful, burst into flames.

When police arrived at the scene, they found a scratched up embarrassed man who sheepishly told police that the smoldering wreck was a Ferrari, and,

“I’ve only just got it, picked it up an hour ago.”