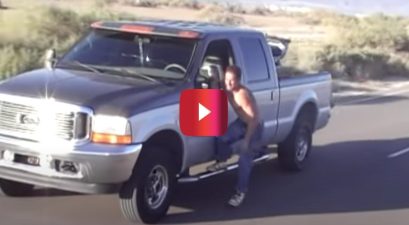 How many construction workers does it take to stop an out-of-control concrete buffer? Well, apparently it takes around 15 of them. At least, that’s how many were standing around the machine trying to brainstorm a solution. It was quite a hilarious scene that was all captured on cell phone video.

The beginning of the video is one of the funniest parts of the whole thing. Just look at all the people blankly staring at this machine spinning. I can only imagine the thoughts that are running through their heads at that moment. Things only get better as they start going forward with some of their ideas to stop this thing. Their first attempt included grabbing a long piece of wood to try and break the momentum, and while doing so, another guy grabs a bucket of water to throw on the engine. Of course, neither idea works very well.

Their third solution was to grab a big tarp and throw it over the top of the buffer. It almost appeared to work flawlessly, until the machine ripped it out of the construction workers’ hands and kept on spinning. Now, even though the buffer is still turning round and round, at least the guys had a tarp to try and grab hold of. They continue to fail for a while, trying to get a hand on the machine, but eventually someone snatches it and holds it long enough for them to shut it off. Whoever finally grabbed that tarp deserves a raise.

As if this video weren’t funny enough, you’ve also got to listen to these guys wheezing while laughing in the background. Hopefully, the boss wasn’t hanging around at this time to witness this craziness, but at least they got the machine stopped in the end. Luckily, no one got hurt, and I’d assume they had a good chuckle about it themselves.