There is huge news about the new VW Microbus 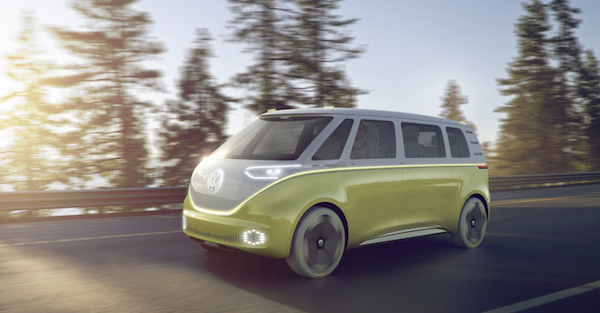 Volkswagen is getting serious about electric vehicles and is counting on one of its most iconic models to take their new I.D. electric car sub-brand into the mainstream. The I.D. Buzz Microbus was first shown to the public at the Detroit Auto Show this year.  VW’s Herbert Diess confirmed it will go into production and told Auto express:

“Emotional cars are very important for the brand. We are selling loads of Beetles still, particularly in US markets. But we will also have the Microbus that we showed, which we have recently decided we will build.”

Using what VW calls their modular electric model (MEB), the bus will share the same basic platform as other electric models they plan to roll out.  This means coming out with a new car or truck simply requires a body and not an entirely new chassis.  The battery will also be part of the floor leaving loads of room open for a larger cabin and more trunk space.
This Microbus will be a slight upgrade from the buses that were cruising up to Woodstock 69.  Details may change before the bus is launched somewhere around 2020, but this is what we know so far.  The van will seat 8 with the front seats able to rotate rearward while in autonomous driving mode or parked. The bus will have an 83 kwh battery or an optional 111 kwh battery with a projected 270 mile range. Performance for the BUZZ is pretty trippy at 369 horsepower pushing you to 60 mph in 5 seconds and a top speed of 99 mph. So far, VW claims you can charge up to 80% in 30 minutes although that, along with other specifications, may change by the time this hits the road.
With most car makers designing some sort of EV, this move for VW is perfect. The company is finally starting to get over the hump created by their diesel emission tampering scandal and reinventing themselves as an EV company is very fitting.  It will be interesting to see how a massive company like VW handles charging stations.  With a bus like this likely being marketed to people who enjoy long road trips, camping, etc, an extensive charging infrastructure will be needed. Joining forces with Telsa seems to be the most efficient way of doing this.
Now, with just about three more years to wait, it’s probably a safe bet to start investing in legal marijuana stores now. This bus is going to spark up a lot of old memories for a very large group of people and let’s just say it’s a good thing the bus can drive itself.
Related: VW’s Concept Electric Microbus Goes 270 Miles On One Charge